Set 2: Ariel
with Devlin
Taco- Putting on the Ritz

Set 3: Luna
with Jozef
Ain’t no hat 4 that, by Robin Thicke

Set 4: Devlin
Joe Cocker – You can Leave Your Hat on

Set 9: Eva
with Everyone
1. Cat in the Hat song
2. Honky Tonk Badonkadonk
3. Carmen Miranda – The Lady in the Tutti Frutti Hat
4. Men Without Hats – The Safety Dance
5. Prince – Raspberry Beret

You’ve locked yourself in the bathroom (again?) and a madman is turning the door into splinters with an axe. A head pokes through the jagged opening and ….. I’mmmmmm Baaaaaaaack. So this is my first attempt at reviewing the dances AND taking the pics. Please forgive me.        Starts humming along to “I Got a Feeling.”

Set 1: Babypea
with Web, Shesa and Gamma
Ke$ha – Take it Off

WOW. What a great set to start off the night. The set was futuristic. Beautiful women in Sci-Fi attire dancing to a wicked beat. Ke$ha was telling us about a place she knows if you’re looking for a show. She obviously was referring to the Empire Room. In addition to glitter on the floor we have particles in the air.

Nara asked Gunner to announce that this was dedicated to one and only, Diawa. While Di has a special place in our hearts, she has a “special-er” place in Nara’s heart. Nara was dancing with her heart on her sleeve and all over her set. There were rainbows… and roses. There was no mistaking how special this was.

Eva painted the town red as she painted it black. Here you can see the blue “no-man” group joined her on stage. Great choreography and a slick set just made it just that much more fun. Fantastic.

It’s not just Nola who get’s what she wants. Jilley wanted our attention… and she got it! If you can tear your eyes away from Jilley’s stunning form for just a minute or two you would notice how well she moves that form around the dance floor, as well. Wonderful.

There’s a bit of a story behind this act, but let me summarize. I have a new body now and I wanted to show it off without stripping off completely. I also wanted to do a set that included some popping. When I discovered “Tilted” it all just came together and I enjoyed doing it. What do you think? Feel free to let me know in the comments below or directly.

In2UDeep transported us to a world of mystery, music, might and magic with a lifesize animated chessboard. With each confrontation the fight became “real” as the characters behind the pieces faced off in a head-to-head dance off.  Magical.

Lina brought us into her fantastically textured and lighted world and taught us all how to do the reflection dance, perfectly. All while turning up the heat. I don’t think I am alone in hoping for some additional lessons after school. Amazing.

Eva set the mood and the tone with her tunes and moves as we asked the audience to join us on stage. One would think that a nice relaxing soak in a giant tub would help us recover from all the heat and sweat generated by tonight’s performances. However, when you add 40 or so of your friends and some are barely dressed while others are covered in bubbles and soap suds, the lines between “clean” and “dirty” start to blur.

Thanks you for joining us for another fantastic Show.

The following pics were taken by Babypea, but if you want to see really GOOD pics, check out Crap Mariner’s Flicker: 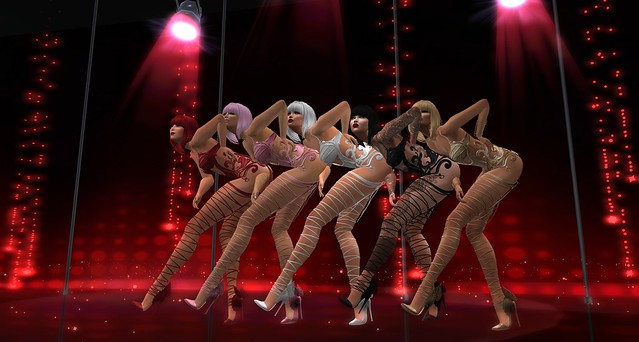 This week’s review was penned by me, Wiz Nirvana. I was sitting at my computer, so to be honest, no pens were involved. DJ Gunner had the audience literally “dancing in their seats” while waiting for the show to start. This could have been due partly to the fact that free booze was flowing at the bar and that The Empire Room hasn’t had an operational restroom since it was built over 5 years ago. Spinning tunes like Frozen by Celldweller and Madness by Muse also helped.

Among the gently cascading cherry blossom petals and the totally mesmerizing music, “The Chairman’s Waltz” from the “Memoirs of a Geisha” Soundtrack, Jo, our little geisha-in-training evolves before our eyes. Her dance also caught the attention of Seb, as the Chairman, before culminating in a sensual duet. The music, dance and set combined beautifully. Stunning.

Note: The soundtrack was performed by the best of the best (John Williams, pianist; Itzhak Perlman, violinist; and Yo Yo Ma, Cellist.)

Set 2: Corri
with Ame
Shut Up and Dance – Walk the Moon

Corri and Ame strolled onto the dance floor like they were born to get together. While the music played, “Shut Up and Dance” by Walk the Moon, the lights flashed and the speakers pulsed and everyone wanted to stand up and dance with them. I would be typing this a bit faster but they took my arm… I don’t know how it happened. A fantastic dance song and a fantastic dance.

Sitting on a bench in a peaceful park, Ariel reflects on those lost on 9/11. While Home Free sings their version of “God Bless the USA”, thoughts turn into dance as she celebrates those who survived and those who continue to protect our freedom daily. A touching tribute and a wonderful dance. Thank you, Ariel.

Set 4: Misha
with Eva, Delaney, Paul, Tristan and Tray
Down with the Sickness – Disturbed

OH WA AH AH AH! At the end of a dark, bloody and littered alley (Is that a corpse I see?), Misha and friends turn up the tunes and are moved by the rhythmic tribal beats of Disturbed’s “Down with the Sickness”. Not often do we see this much energy and feeling transformed to dance. There was heat and smoke on the stage long before the pyrotechnics began. Wow.

When the curtain opened and the beat dropped, so did our collective jaws. Ame was center stage, seductively gyrating in a strap dress. It wasn’t long before she was … strapless. If you could pull your eyes back into their sockets long enough you might have noticed she was accompanied on stage by Babypea and Kyshra. I’m not sure why, but there was probably a good reason they were in cages. With the dancing and Yoncé, there was so much HOT, I’m sure we violated a few Fire Codes. Now we need some Lemonade.

Set in a mysterious train station we were hit by the “boogie woogie” vibe of Lynda Carter’s, Train Train. The women were decked out in pseudo-military mini dresses and Gunner didn’t know how to conduct himself. This was a fun and uplifting dance and I’m sure the entire audience was dancing in their seats or at least tapping their toes. Wonderful!

Note: The song is on the original game soundtrack for Fallout 4, available on Windows, PlayStation 4, and Xbox One.

The gloomy Gothic structure loomed above us, fully ablaze, as Jilley calmly walks out, displaying her own fire and heat exceeds that of her surroundings. Dragons fill the sky as the aggressive drums fill our senses. She is not phased as she commands our attention and the obedience of the dragons. Epic!

I believe this was Lina’s first crowd dance, but you couldn’t tell. The Hot Rod themed Diner with a larger-than-life jukebox was fun and nicely put together. The song choices and dances were equally entertaining. I’m sure we’ll see more of her in this arena. The audience, as well as I, wanted more!

More pics of this show found on Crap Mariner’s Flicker, thank you Crap:

Jilley’s moving tribute to all those lost on 9-11.  She danced remembering someone she lost, and then he was there with her, dancing in spirit.  Even though he is gone as she kneels by his grave, the song sings how she feels him walking beside her.  This deeply touching, most beautiful dance had many watching with vision blurred by tears.

Elysium’s newest choreographer dazzles and WOWs the audience with a super sexy dance complete with stylish set and eye-catching lighting.  So hawt no nudity needed.  WOWZA that costume!!

Very creepy cool!  He suffers and endures as the ghouls get closer and closer, the walls of the tomb closing in on him!  Tons of exceptional mover work in this dance, with moving walls and props plus the ghouls starting in the audience and creeping up onto the stage.

An absolutely gorgeous mirrored set that has to be seen to be believed, and our LuLu dancing in a chandelier… what a brilliant dance!  I love the colour scheme, pinks and purple pastels with crystal and gold.

The girls lost their clothes after surviving a plane crash in the jungle… but never fear!  They found leaves to wear!

Our cherished FRAMS (Friends and Family) joined us on stage to be danced by JILLEY for some audience participation fun!  Thank you Jilley!
Scatman John – Everybody Jam!
Steps – 5, 6, 7, 8
Vengaboys – We like to Party!

Welcome to the weekend!

"When I re-learned how to love, I forgot how to hate"

We are a tightly knit team of dancers and creators born from the ashes of the fiery passion we all share for dancing. Est. 11/15 " When you get the choice to sit it out or dance... We hope you dance "

A lifestyle blog about the virtual world of Second Life

KULTIVATE
The Winds of the Sahara Cabaret
Myth Raven

Inara Pey: Living in a Modemworld

A Kat and A Mouse

The latest news on WordPress.com and the WordPress community.